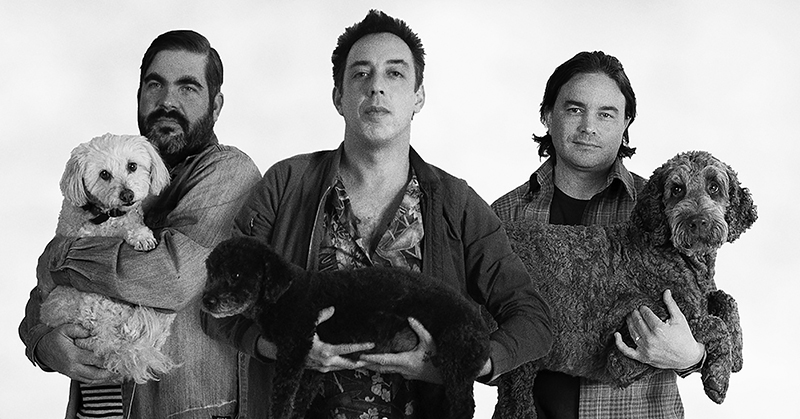 Every moment spent gazing at our screens is oversaturated with content, an ever-accelerated news cycle conditioning our ever-decreasing attention spans. The struggle to stay present, and to foresee a clear, sustainable future, feels very real.

Wolf Parade address this phenomenon head on with Thin Mind , the band’s 5th full-length and second to be produced by John Goodmanson (Bikini Kill, Sleater-Kinney, Unwound).

“‘Thin mind’ refers to the way that being around too much tech has made our focus thin,” says keyboardist Spencer Krug.

“It’s opening one more page, scrolling one more thing,” adds guitarist Dan Boeckner, “and the weird, sort-of hollow automaton feeling that you get from it.”

“This record is very personal, but at the same time, we’re all coming from the same place of a general sense of anxiety,” says drummer Arlen Thompson. “How do you deal with the constant barrage of having your opinions swayed by all these different actors when you don’t know who they are or what their purpose is? There is no normal anymore.”

Thin Mind marks a return to the original power trio of Dan, Spencer and Arlen, following multi-instrumentalist Dante DeCaro’s amicable departure from the group in 2018, after the conclusion of their world tour supporting Cry Cry Cry.

One month later, the trio got together at Risqué Disque , an old stone barn-turned-studio in the woods of Vancouver Island, to begin writing Thin Mind— emerging with an album about making sense of the present while reckoning with visions of the future.

“It’s the first record where we did the whole thing in one place from start to end,” says Arlen. “It was just the three of us until John came in, woodshedding in this moss-covered, rotting building.”

Album highlights include “Julia, Take Your Man Home,” “Forest Green” and “Against the Day”, with lyrics split evenly between Dan and Spencer.

On “Julia, Take Your Man Home,” Spencer imagines the worst version of himself over a deep groove and an exaggerated, fictitious caricature.

“It’s not literally me,” he says. “I’ve never carved shapes that look like dicks into a bar, but it is the toxic male version of myself.”

beauty, and ugliness, of Vancouver Island—not only where Thin Mind was recorded, but where Arlen and Spencer now live, and Dan grew up.

“The island has a really weird, pervasive darkness to it,” explains Arlen. “It’s got amazing nature, and there’s an inescapable spiritual vibe to the place. But it’s held with this tension between real estate money and nature now constantly being logged and developed. It’s a process that’s been happening for maybe 150 years—you’re watching this beautiful place just kind of melt.”

“Against the Day,” which features shared verses from Spencer and Dan, similarly constructs a synthetic shell to examine what’s natural and what is not.

“Dan told me it was about two vampires exploring the human world,” says Spencer, who assumed the role of one vampire in his verses.

“I wanted to tell a story about Lovecraftian, geological love passing in a place,” says Dan. “and two souls that were connected to each other. Every era that they go through, they are always on the outside of culture, always outsiders.”

Ultimately, the band was only able to subvert the “thin mind” phenomenon by jumping right back into its creative process after Cry Cry Cry’ s tour, with each member bringing their anxieties out of the modern world and re-examining them on an elemental level.

“There’s this positive element to ‘thin mind,’ too,” explains Dan, “if you’re in that liminal, very modern psychological state in nature. At best, you become an incredibly powerful being for interpreting and processing information at a speed that our parents and grandparents couldn’t possibly comprehend. In the cognitive dissonance where we made this record, there was no escape.”

John Goodmanson produced “Thin Mind” at Risque Disque on Vancouver Island, BC, and mixed it at Bogroll Studios in Seattle, WA. It was mastered by Noah Mintz at Lacquer Channel Mastering in Toronto, ON 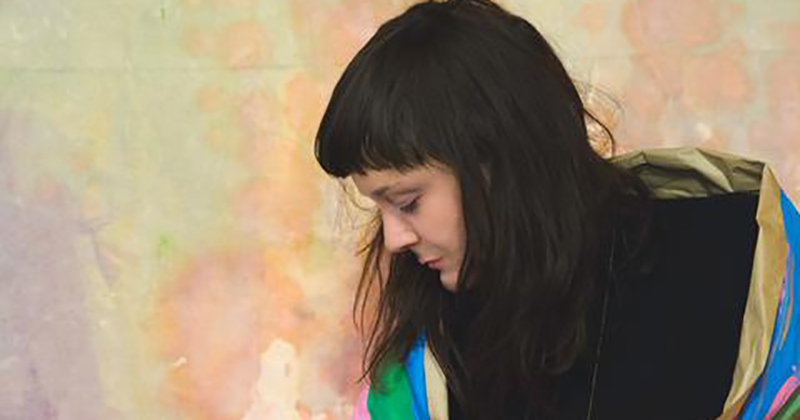 “I don’t want to waste it this time…”

If anyone has earned the right to sing those words, it’s Elizabeth Powell. Since forming Land of Talk in 2006, the one certainty in her life has been uncertainty, as her band has gone from being one of Montreal’s most brash, buzzy indie rock acts to one of its most elusive and enigmatic. After recording Land of Talk’s debut EP, Applause Cheer Boo Hiss, Elizabeth lost her drummer (the first in what would become a semi-regular pattern of line-up changes). After releasing Land of Talk’s first full-length record Some Are Lakes in 2008, she lost her voice. And after the 2010 follow-up Cloak a… , she lost her will.

Elizabeth knew she needed a break from the album/tour/album/tour cycle after Cloak and Cipher’s release—she just didn’t plan on it becoming a full-blown hiatus. “I was just tired and felt a little disenchanted,” she says. “I think that’s very common—to feel industry-weary. I just couldn’t do it. The only thing that was keeping me there was the music, and I think the music had become a footnote of the whole story. I wanted to get back to the music.”

In 2011, Powell left Montreal behind and retreated to her grandparents’ cottage near Lake Couchiching, Ontario “to do the Glenn Gould thing and hunker down and write some songs.” But all her work was lost when her laptop irreparably crashed, taking all her GarageBand demos down with it. With Land of Talk, Elizabeth had survived multiple personnel changes and a vocal polyp that nearly robbed her of her ability to sing. But the combination of post-tour fatigue and the demoralizing loss of her new material brought her to a dead stop. “After that,” she says, “I just didn’t want to think about music at all. I kind of retired. It was a throw the baby out with the bathwater scenario.”

After settling back into her hometown of Orillia, Ontario, Elizabeth was dealt an even more devastating blow on New Year’s Day 2013: her father suffered a stroke. All of Elizabeth’s energies went toward caring for him, but in her darkest hour, the elder Powell provided Elizabeth with a guiding light. “I was visiting him in the hospital,” she recalls, “and he just said, ‘Come on, can you just do this now? Can you just get back to music?'”

Elizabeth went home and wrote “This Time,” the song that ultimately served as the spark—and thematic focus—for a new Land of Talk record. It’s the sound of Elizabeth rediscovering her musical muse, and unleashing the sort of do-or-die ardor that only comes when a life-altering event forces you to stare mortality in the face. “That’s when it became more urgent and undeniable,” Elizabeth says. “I just wanted to repeat those lyrics over and over again, because that’s all I really had to say. At that point, music became a self-help thing, a coping mechanism—because music is how I understand myself and the world.”

And just as Elizabeth was reconnecting with her passion for songwriting, she serendipitously reunited with a former foil: original Land of Talk drummer Bucky Wheaton, who emailed her out of the blue after falling out of contact for several years. Before long, the two were woodshedding new songs in Toronto at Broken Social Scene/Do Make Say Think bassist Charles Spearin’s home jam space, and then booking time at Montreal’s Breakglass Studios with the Besnard Lakes’ Jace Lacek, who recorded the first Land of Talk EP (and, for this new record, shared bass duties with wife/bandmate Olga “Oggie” Goreas). “Without sounding too gushy, it’s been a beautiful reunion,” Elizabeth says. “This album became my homecoming to Montreal.”

But if Land of Talk’s new album Life After Youth recreates the same conditions and recruits much of the same personnel that produced Land of Talk’s scrappy debut EP, the end result is dramatically different than anything the band has attempted before. While caring for her father, Elizabeth fell under the spell of classical, ambient, and Japanese tonkori music, whose meditative quality aided his recovery. Immersing herself in those sounds would change her entire approach to music making; she started writing songs without her trusty guitar, instead building tracks up from synth beds and programmed loops. “Because I was feeling so stripped down and having powerful realizations and emotions about life, I wanted to get away from guitar into more hypnotic synth sounds,” she says. “I wanted things to be more lulling and comforting.”

Life After Youth’s centerpiece track, “Inner Lover,” presents the most radical results of those experiments. It’s an audio Rorschach test of a song: key in on the incessant synth pulse underpinning Elizabeth’s pleading vocal (“take care of me!”) and the track assumes an ominous intensity. But when you surrender to the relaxed drum counter-rhythm and subliminal harmonies, “Inner Lover” projects a graceful serenity.

Even the songs built atop more traditional rock foundations exist in that liminal space between dreaming and waking life, confidence and doubt, raw feelings and soothing sounds. “Yes You Were” opens the record with a cold-start surge that’s overwhelming in its immediacy, with Elizabeth’s furiously strummed guitar jangle and wistful lyricism bearing all the adrenalized excitement and nervous energy of seeing old friends (or, in her case, fans) for the first time in ages. And as its title suggests, “Heartcore” is a collision of soft-focus sonics and emotional intensity, with Elizabeth’s crystalline vocals hovering above a taut, relentless backbeat and disorienting synth squiggles. Even the turn-a-new-leaf optimism of “This Time” is presented less as a triumphant comeback statement than a warm reassuring embrace—its beautifully dazed ‘n’ confused psych-pop swirl acts as a calming force as you hurtle toward life’s great unknown.

“It just seems like when we play that song, it seems to give people levity in the room and everyone lightens up and I think that’s worth its weight in gold,” says Elizabeth. “That’s all I feel I’m trying to create: moods that are very conducive to connecting, that make people feel good enough to let their guard down and let them know it’s okay to just open up.”

Fitting for a song about reconnecting with the world, “This Time” was the product of another fortuitous reunion—between Elizabeth and her old friend Sharon Van Etten, who lent her songwriting smarts and heavenly harmonies to that track, as well as “Heartcore” and the Fleetwood Mac-worthy “Loving.” And Van Etten is just one member of a veritable indie-rock dream team Elizabeth recruited to complete the album: the moonlit ballad “In Florida” was recorded by producer John Agnello (Dinosaur Jr., Kurt Vile) in his New Jersey studio, with Elizabeth backed by former Sonic Youth drummer Steve Shelley and Roxy Music/Sparks bassist Sal Maida.

From Montreal to Orillia to Toronto to New Jersey and back to Montreal again, the story of Life After Youth resembles one of those Raiders of the Lost Ark maps with the red routing lines bouncing back and forth into a blur—”which is kind of like what my brain is like,” Elizabeth says with a laugh. But from that mental and geographic scramble, a work of great focus and clarity has emerged. To paraphrase the late David Bowie, it’s been seven years, and Elizabeth’s brain hurt a lot. But she stands today as the patient-zero case study for Life After Youth’s therapeutic powers. These are the songs that got her through the tough times. And now, they can do the same for you.