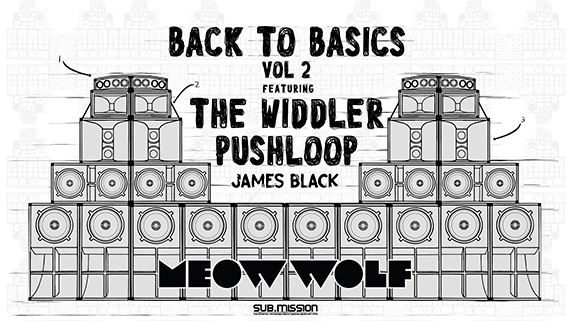 Born in Tel Aviv and living in Austin, TX, The Widdler is widely recognized as an innovator and originator of dub sound. Constantly practicing, The Widdler incorporates mix sessions into his daily routine, which translates to his flawless performances at shows; headlining with the likes of Doctor P, Reso, Ajappai, Tipper,  Bassnectar, Caspa, Mary Anne Hobbes, Excision, Bukez Finezt, Truth, Downlink, & many more as well as a member of US imprints Dank 'N' Dirty Dubz, MalLabel Music, Deep Dark & Dangerous, & Sub.mission. Taking influence from various genres of music and lifestyle, his tunes comes in all shapes and colors. From the chilled reggae dubs and blue mood atmospheres to the mean menacing throbs of bass and percussion, The Widdler knows how to weave his musical roots with his production that makes each set entirely special. Sit back, light a spliff, and enjoy the sounds of The Widdler

From late night renegades in the Santa Cruz mountains to dark, sweaty nightclubs, Pushloop has spent the better part of a decade flexing soundsystems with a commanding presence. Inspired by artists like Mala, Truth, The Widdler, and Kryptic Minds, Pushloop has carved out his own unique sound blending world music elements with deep, heavy basslines.

Since emerging from the studio with his first release on the Bay Area's infamous Mallabel, Pushloop has become a regular on heavy-hitting labels like Dank N Dirty Dubz, Deep Dark and Dangerous, ShadowTrix Music, and Heavy Traffic Recordings. Over the years Pushloop has showcased a variety of sounds, ranging from deep, melodic EPs like Midnight Wax and George Orwell, to more experimental, leftfield bass releases such as Too Much Tuna and Loose Wires.

While a passion for producing music has resulted in an impressive resume of releases, Pushloop began his love for dubstep as a DJ and this is clearly evident when he gets behind the decks. Pushloop takes pride in bringing crowds on a journey of bass, blending modern stompers with classic throwbacks and always dropping a healthy serving of his own dubs. With consistent bookings across North America, Pushloop is on a campaign to share his music with anyone who will listen and is an act that shouldn't be missed.