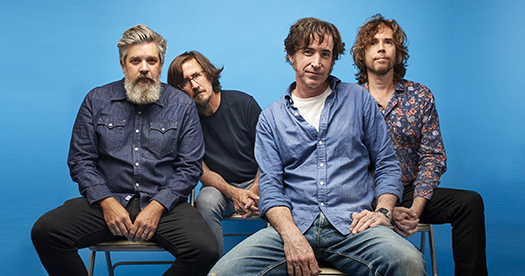 Album highlight “Get Famous” distills the Mountain Goats fervor into a radio-ready pep talk, theconcise pop ideal in that trademark rallying cry. But Darnielle’s not the type to wish fame onanyone. Instead, he sings the song’s title as if it were a curse, as Hiss Golden Messengercollaborator Chris Boerner peels off a bronzey guitar lick. Later, despite the insistence on “TidalWave” that “even the very proud probably die on their knees,” Hodges’ organ and Douglas’clarinet produce crystalline towers that reach up to the sun.

That still leaves room for esoteric wordplay and lustrous metaphor. “Taste of hot ashes on mytongue all day/ I took my rifle with me to bed/ But I’m getting into knives,” he sings on the titletrack with an eerie calm, finding intimacy between villain and victim. Even through the prism ofdirect, unmoored emotion, Darnielle’s songs can be viewed close up without swallowing youwhole. Some can be seen from above, heightening their grasp of “non-conventional munitions”and stalked perpetrators. The steely acoustic guitar and counterpoint percussion ring aroundHodges’ organ like a snapshot campfire, while Darnielle threatens murder in the most vague,quiet way possible.

After working as the engineer for 2019’s ​In League With Dragons, ​Matt Ross-Spang suggestedthe band come down to Sam Phillips Studio for a tour—which in turn led to the decision torecord in Memphis and to promote him to producer for the followup. Recorded in a single weekwith “magic” microphones salvaged from the Nashville Network, the record’s immediacy burnsbrightly in desperate contradiction. On “The Last Place I Saw You Alive”, Darnielle details thedarkness of knowing you’ll never see a loved one again, and even the potential for hope issubverted. “Us worms turn into butterflies, I guess,” he sings, the heartbreaking sincerity ringingout over resonant piano half a second past the realization that worms aren’t caterpillars.Elsewhere, “Wolf Count” draws sympathy for a wolf being hunted, despite the wolf’s dreams of agood ol’ bloodbath.

“Everything becomes a blur from six feet away,” Darnielle sings on “Tidal Wave”. Written yearsbefore any concern for social distancing became a constant subject of conversation, the songinsists instead that not every wave is a tidal wave. “Some waves are slow things that cover youwithout you having noticed,” Darnielle explains. But even that bit of grim perspective has itscomforts. “With the album, you either slam the door shut or you open on to the next path,”Darnielle avows. “The trick is to sew up an ending, but at the same time open the doors to thetheater and let the sunlight in.” Albums like ​Getting Into Knives ​sweep you out that door andaway into the center of a vast sea. You may find yourself submerged into inky depths orreaching a purifying breath of air with songs like these. Songs that enlighten despite theinevitability of loss.

There are, after all, a number of ways that you can find yourself underwater.