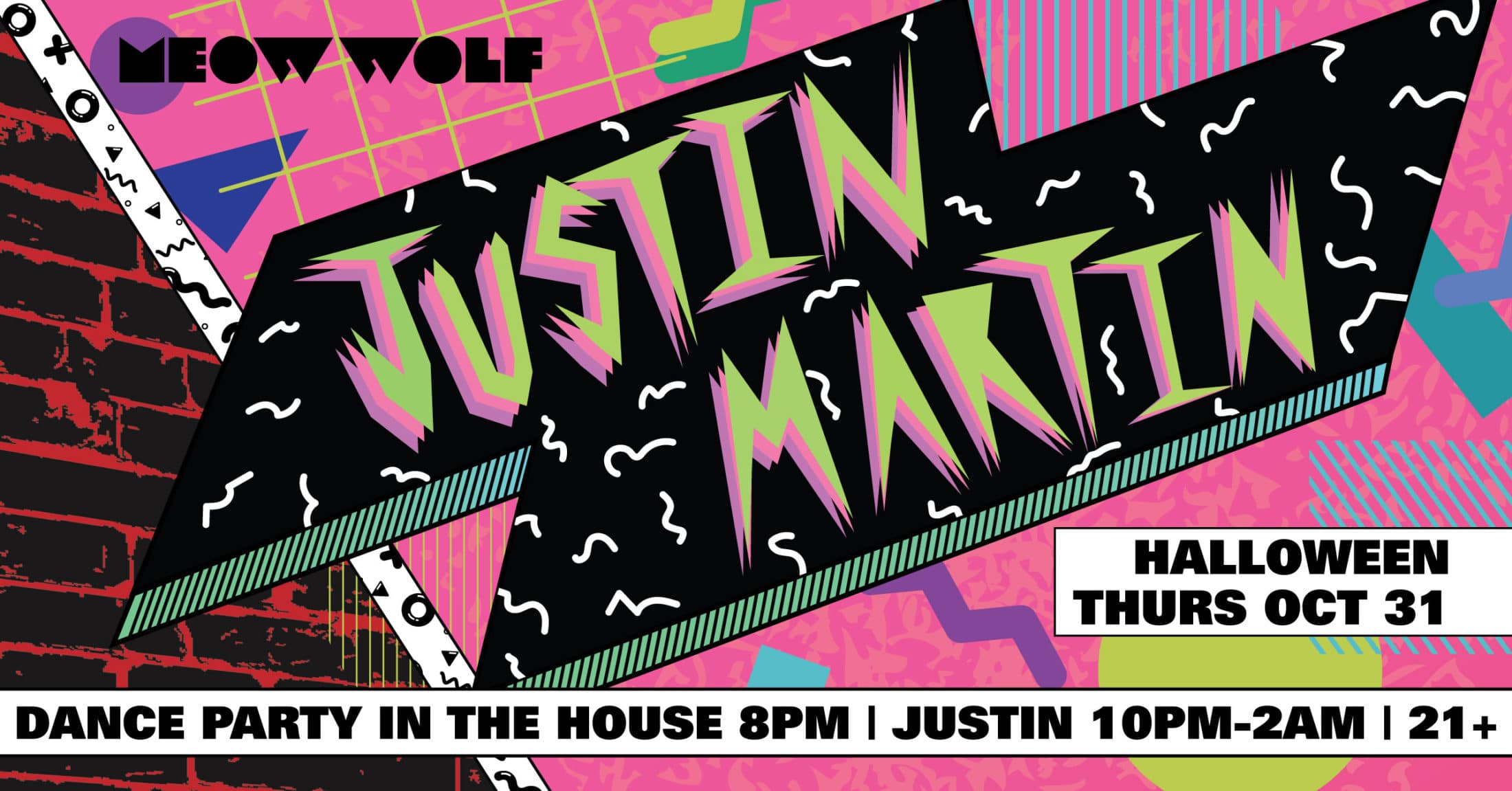 Amidst the Justin Martin show on Halloween night, sign up to experience?Tonight is for Shadows- a one night only immersive and interactive theatrical adventure for small groups of audience members. The audience will join friends Edwina and Kalliope as they try to connect with the missing Pastore twins who used to live in what is now known as The House of Eternal Return. Join them on a wild and magical ride of mystery, ritual, and shadows!

As the late Oscar Wilde once said: life is too important to be taken seriously, an ethos that Justin Martin is sticking with despite achieving soaring success over the last six years as a producer and international DJ.?Justin initially pricked the ears of the electronic music community in 2003 with his first record The Sad Piano on Ben Watts Buzzin Fly label. Everyone in the electronic music food chain got involved, from the A list DJs like Derrick Carter and Pete Tong that were playing the track, to the international music press that were raving about it. It even translated to the German underground, with Poker Flat licensing it for Steve Bugs Bugnology compilation. Like someone that goes bowling for the first time and gets five strikes and a turkey, Justin couldnt really have hoped for a better entrance.?Feeding off the energy of the San Francisco underground and mentored by fellow super producer Claude Vonstroke, Justin was intrinsically involved with the development of dirtybird records, appearing on its first four releases. Justin was soon ready to take flight, releasing a string of solo EPs which flaunted a very unique sound and garnered still more respect among fellow DJS and heavyweights of the scene.?As well as his formidable arsenal of original productions, Justin is now equally known for his collaborations with his brother Christian as The Martin Brothers, producing such hip-hop influenced hits as Stoopit and Dum. Justin has also made his mark remixing such bona fide classics as Radioheads Nude, Marshall Jeffersons Mushrooms, and TGs Revox, firmly establishing himself as the man to make big tracks even bigger.?Demand for Justins skills behind the decks has skyrocketed with his bookings schedule basically crammed to capacity for the next 4 months. With bookings confirmed everywhere from Exit Festival (Belgrade), to Sonar (Barcelona) to Panorama Bar (Berlin), Justins diary is reading like the dreams of a professional raver. Stateside he continues to be a regular fixture at the dirtybird events in San Francisco and beyond.?Further nods to his skills as a DJ and tastemaker are apparent in his growing discography of mix compilations, most notably his own Chaos Restored mix series on the prestigious Buzzin Fly label.?Music journalists typically describe Justins sound as melodic and tough with his music encapsulating both melody and emotional depth yet always with enough undeniable ass shaking properties to translate to the floor.?Im always trying to find music for my DJ sets that rattles sound systems, but still has enough melody and interesting texture to expand your mind even if youre sitting at home on a snowy or rainy day.?In 2009, production wise Justin has a few EPs scheduled to drop on dirtybird, a remix for Freerange, and a DJ mix for Ministry of Sounds Underground series compilation. He remains as enthusiastic as ever to be involved in the scene. When recently questioned by Resident Advisor on what hed be doing if he wasnt a DJ or dance music producer he just replied: Wishing I was a DJ or music producer.?By all accounts its hard to tell him to wipe that smile off his face.
21+
Spoolius
Spoolius plays in the house from 8PM - 10:30PM!
Where
Meow Wolf Santa Fe
1352 Rufina Circle
Santa Fe, NM
View Map
When
October 31st, 2019 @ 8:00pm - 2:00am
×
Justin Martin
October 31st, 2019 @ 8:00pm - 2:00am | Santa Fe, NM
10/31/2019 @ 8:00pm 2019 | Santa Fe
Not on Sale
Subtotal $0.00
No tickets selected. ticket(s) selected.
Home   Terms & Conditions   Privacy & Security   Refunds
© 2021 Meow Wolf