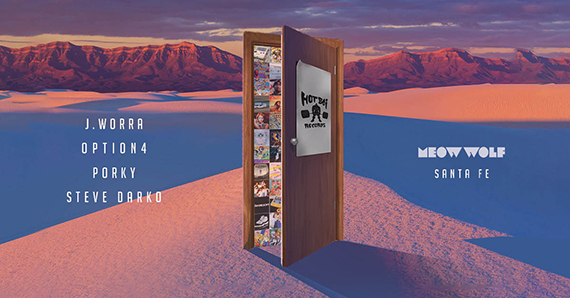 The new communal driven record label HotBOi Records continues it’s breakout year with unique and diverse lineups around the country. Currently one of the hottest new independent imprints in the US, HotBOi Records has made large strides in breaking down barriers in dance music culture and has ingrained itself into all facets of underground music.

option4 is a house music warrior. With releases on Ninja Tune, Nurvous, Club Sweat and more besides, his music packs a significantly bigger punch than your average house cut, incorporating tribal rhythms, intricate melodies and fierce low-end to produce a style that is never short of mesmerizing.

Based in Denver Colorado, option4 has been honing his craft for many years, but looks set to have a landmark year in 2017. Recently named by US legend MK as one of his producers to watch for the year ahead, tracks like ‘Vibe On’ and ‘Rise Of The Cat Lord’ – released by seminal NYC imprint Nurvous and Club Sweat respectively – have been making an impression in all the right quarters.

option4 is also one half of the duo 909 Til Infinity alongside fellow house music devotee MANIK. Their twisted, late-night party jams have found their way onto Nurvous and Psycho Disco! amongst others.

In one of his other incarnations, option4 is also one of the biggest underground party promoters in the States, and the founder of TheHundred: a community movement born out frustration at the lack of club nights in Denver. TheHundred has now thrown hundreds of sold-out parties, due in no small part to his passion for and commitment to the underground electronic music scene.

Don’t be mislead by the light-hearted name, Porky is a man who takes partying very seriously. David Leon, as he is otherwise known, is the wildcard of Desert Hearts, the San Diego-bred crew of DJs and rabble-rousers tearing up the underground with deep, dark, and weird house and techno.

A San Diego native, Leon was influenced early on by older brother Mikey Lion and dusty jaunts to Lightning in a Bottle and Black Rock City, but over the past two years, his renown as a DJ and chops on the decks have grown to match his larger-than-life personality.

Porky leveled up his game performing in the mystical jungles of Tulum, the dusty expanses of Burning Man, and perhaps most notably, at the bi-annual Desert Hearts weekenders in Southern California. The group’s ascent from a renegade rager to a dance music phenomenon that has been one of the most celebrated stories in dance music over the past couple of years, and Porkchop’s standout sets and take-no-prisoners party attitude have been at the center of the whole whirlwind.

In a sea of black-shirted stoics, Porky pours himself into the DJ booth bursting with life and color. His hair and clothing melt into bright gradients and he smiles unpretentiously as he deals out techno obscurities and house crowd-pleasers alike. His sets are a reminder of why we’re all on the dancefloor in the first place––to party. And nobody gets the party started like Porky. He’s noted for being one of the most versatile member of the Desert Hearts Crew. His ability for weaving narratives through genres is clear, and he has a knack for dropping tracks that become moments you remember.

With hair in technicolor and his USB filled at all times with dancefloor demolishers, bursting with love and positive vibes, Porkchop has developed into one of the most unpredictable, but dependable DJ’s in the whole scene. He’s earned his way onto stages with the likes of Lee Burridge, Justin Martin, and Tale of Us, played festivals like Symbiosis and Envision in Costa Rica, five-time veteran at Burning Man, playing iconic camps like Robot Heart and Distrikt, and all over North America with the hot-ticket City Hearts tour. This is just the beginning as Porkchop is only rising. All signs point to 2017 being the Year of the Chop as he cements his place in the highest echelon of underground dance music.