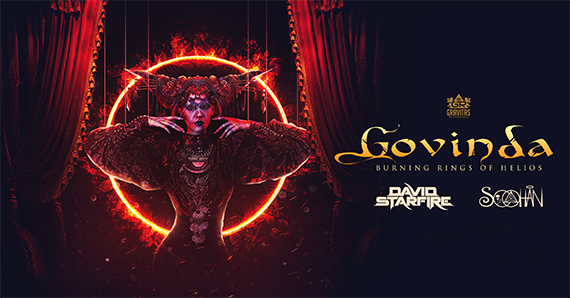 Govinda is the alter-ego of Austin based producer/composer Shane Madden. He began studying violin and composition at the age of eight and went on to study classical violin at the University of Texas where he fell in love with electronic music production. It was in Madden’s pursuit of his Middle-Eastern and Spanish roots that he opened his ears to music from around the world. From experiences learning violin with mysterious masters on his journeys across the globe and his passion for modern design and technology, the current sound of Govinda was born.
Govinda has played with Thievery Corporation, Tipper, Bassnectar, Shpongle, Cheb I Sabbah, STS9 and many more and been featured on over 25 compilations such as Buddha Bar II, Asian Travels II, and Nirvana Lounge selling a combined 400,000 copies. Govinda has played at numerous festivals throughout North America including Coachella, Lightning in a Bottle, Sea of Dreams, Shambhala, Sonic Bloom, SXSW and more. Govinda's music has had many synchs on TV and independent films and has over 5 million Spotify plays to date.
The Govinda show is truly a multi-sensory experience that immerses the audience with a textured exotic atmosphere which features mesmerizing vocals, visual performance artist Jordan Remar,  live projections, live ambient Romani-style and uniquely crafted violin for a truly energetic and magical live presence.

David Starfire is a world-renowned producer/multi-instru-mentalist/DJ that is known for his signature “global-glitch-bass” sound. His niche is mixing world instruments and fusing them with modern beats. For his DJ sets, he often performs with per-cussion and various world instruments such as the phin (Thai lute) or the tumbi from India.