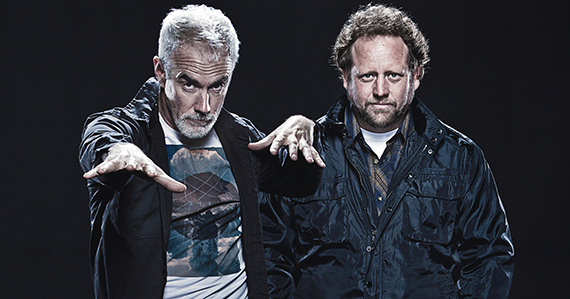 A live band on hi-tech hyperdrive, EOTO has forged new territory in the electronic dance music movement. Locked and loaded with computers, loopers, midi controllers, routers, software, mixers, and the latest in music technology, multi-instrumentalist Michael Travis and percussionist/vocalist, Jason Hann have sent a speeding bullet through the electronic dance community due to their innovative 100% improvised approach and as a result, their exclusive sound. Not just a haphazard foray into experimental music, the duo starts their musical adventure from scratch (there are no pre-recorded loops, no backing tracks, and no pre-constructed songs in their live production) building each set, note-by-note, beat by beat, live before the audience as each show explodes into a full-scale dance party.
A double-headed juggernaut, the duo works effortlessly as they twist and turn through a series of genres including Drum & Bass, Electro, Dubstep, House, and Glitch Hop dance music; virtually constructing a new sci-fi soundtrack each night they perform.
What makes EOTO extraordinary is the way the duo designs their performance by looping live guitar, bass, and keyboard synths, alongside with live drums and vocals, to carve out their sound right before the eyes and ears of the audience. No small feat in music production; even the highest order of studio producers, audiophiles, and musicians have a hard time wrapping their head around EOTO’s approach, and the wild ride that results.
Much of EOTO’s other-worldy sound takes place long before the band takes the stage. Using unique mic placement and internal software EQ for the drums, combined with an internal system for self mixing and monitoring, EOTO is able to craft its sound to the audience in a way that most sound engineers might overlook when mixing an electronic band. It’s not just rock instruments on stage mixed with computer sounds, its live instruments treated in a different way, sonically, for the purpose of performing a different style of music. These nuances are always a source of amazement when EOTO is approached about how they “get their sound”.
Best known as the drummer and percussionist for the wildly successful String Cheese Incident, Michael Travis cut his musical teeth in the junior high school marching band playing the French horn in the early eighties. However, his deep love for rhythm has always played a major role in his career. In 1986, Travis picked up the hand drum and started playing guitar in Santa Cruz, California. It wasn’t until 1995, when the drum kit found its way into his life, a moment that would shape his career forever. For more than twenty years he has held down the rhythm section for audiences spanning hundreds of thousands of fans, in cities around the globe. His keen interest in international and world music has dotted his career allowing him to explore multiple genres of music, while keeping dexterity in each instrument he plays. His ability to perform as adeptly on the guitar, bass and drums allow EOTO to create a rich organic sound, often overlooked in today’s press-play DJ community.
When Jason Hann joined Michael Travis in the rhythm section of the String Cheese Incident in 2004, he was no stranger to the big stage. Performing professionally since the age of 12, he has toured and recorded internationally with the likes of Isaac Hayes, Loreena McKinnett, Dr Dre, Rickie Lee Jones and Vinx. His depth and knowledge of percussion has taken him around the world to study in countries as far as Mali, Ghana, Haiti, and Korea allowing him a rare deftness to switch seamlessly through a variety of genres of music, whether it’s Rock, R&B, Pop, Jazz, Latin, Latin-Jazz, Flamenco, African, Persian, Electronica, Techno and World music. With an extended biography that reads like the who’s who of music, it’s no wonder he found himself naturally drawn to developing a more experimental sound of his own, with EOTO.
As the perfect musical pairing, EOTO draws upon their rich history, training, and diverse influences to create an innovative yet fully improvised electronic music experience unlike any other on the scene today. EOTO has had many unique sit-ins that have allowed for, yet, another mark of their original sound including, The drummers of Stomp, members of String Cheese Incident, members of Umphrey’s McGee, Stanley Jordan, Dominic Lali (Big Gigantic), David Satori & Sidecar Tommy (Beats Antique), Billy Kreutzman, Vinx, Toni Childs, Karsh Kale, Jamie Janover, Steve Kimock, Jamie Shields (New Deal), and Adam Deitch (Lettuce) just to name a few. 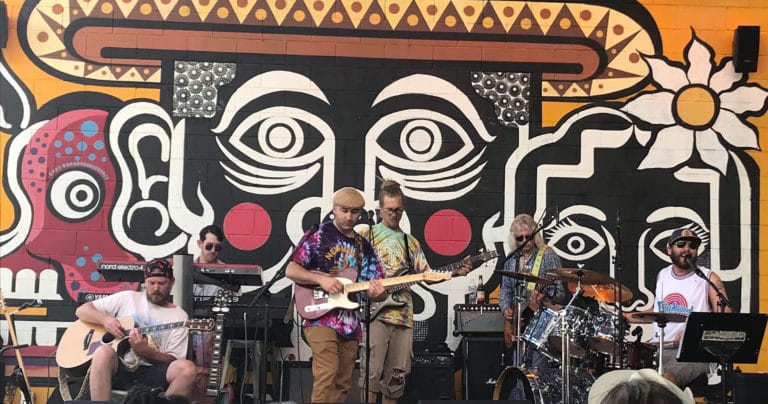 Pherkad is named after a star in the Little Dipper constellation. Once, astronomers believed Pherkad and its neighboring star Kochab to be the Guardians of the Center of the Universe, as they rotate around night sky’s central point- Polaris, the North Star. Originally the brainchild of guitarist Jason Bowers and drumming lead-vocalist “Cheese”, Pherkad has grown from a duo into a four-piece jam band paving a path through the comfortable and familiar and well beyond into the sonic unknown. Next to join the outfit, chronologically, was the talented keyboardist Zac Ramsey, who gets ultra-funky ticklin’ the ivories every night until they just can’t take anymore. Holding down the low end is bassist Chris “Chrispy” Patchett, who has been dropping bass bombs as well as showcasing his songwriting talent, taking lead vocals occasionally. Get ready to blast off, because Pherkad is going to take you on a jamtastic voyage with their well composed, tasteful and downright funky blend of music. “It’s like fractals for the soul”. The future is bright, better bring your sunglasses.