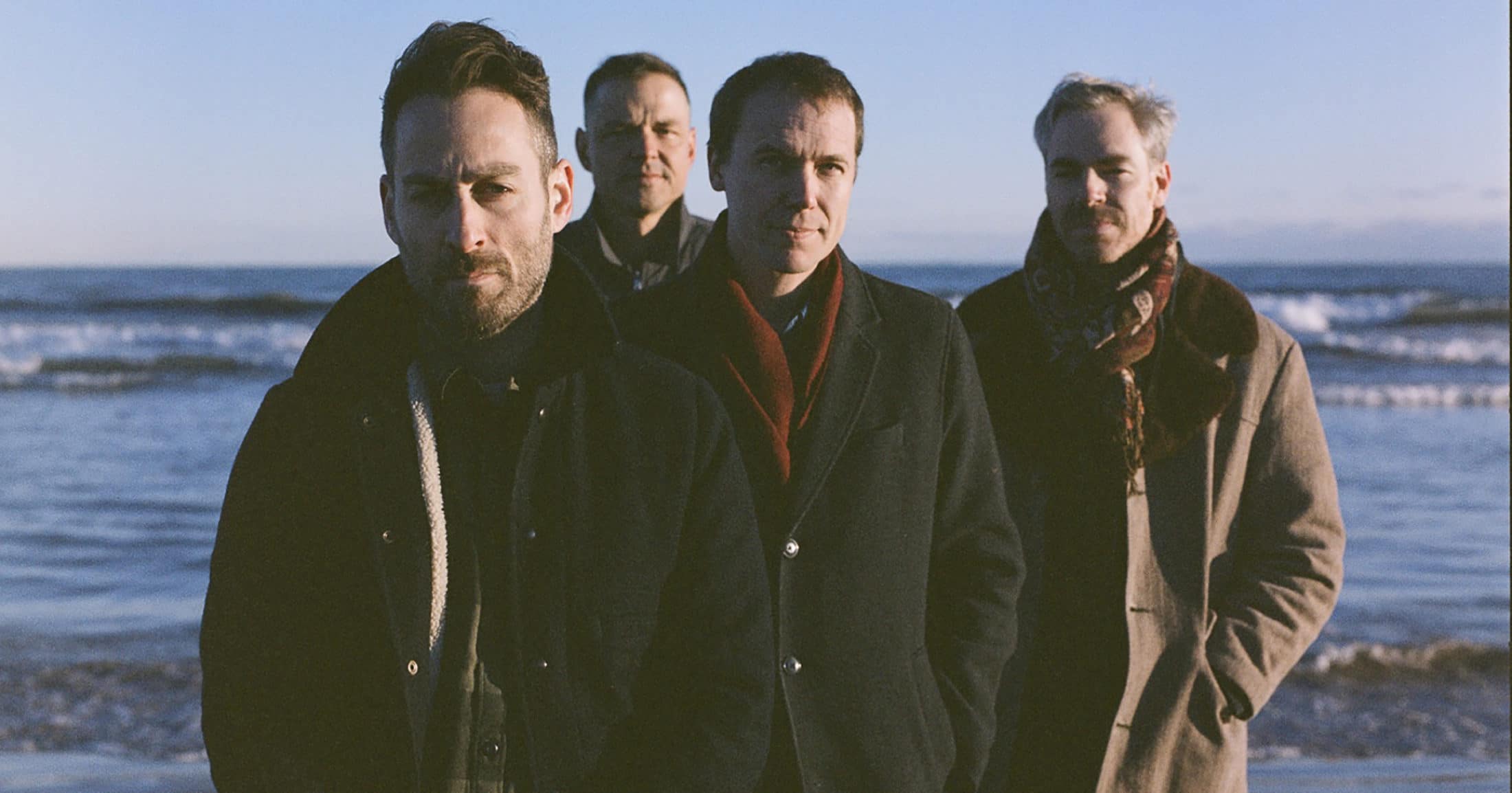 About this Event
The quietest voices can be the most durable.

American Football's original triumph, on their 1999 self-titled debut, was to reunite two shy siblings: emo and post-rock. It was a pioneering album where lyrical clarity was obscured and complicated by the stealth musical textures surrounding it.

Like Slint's Spiderland, or Codeine's The White Birch, even Talk Talk's Laughing Stock, American Footballasked far more questions than it cared to answer. But there wasn't a band around anymore to explain it, anyway. The three young men who made the album -- Mike Kinsella, Steve Holmes, and Steve Lamos -- split up pretty much on its release.

Fifteen years later, American Football reunited (now as a four-piece, with the addition of Nate Kinsella). They played far larger shows than in their original incarnation and recorded their long-anticipated second album, 2016's American Football (LP2). The release was widely praised, but the band members still felt like their best work was yet to come.

'I feel like the second album was us figuring it out,' says Nate. 'For me, it wasn't quite done. I knew there was still more.'

Enter American Football (LP3). 'We put a lot of time and a lot of energy into it,' says Mike. 'We were all thoughtful about what we wanted to put out there. Last time, it was figuring out how to use all of our different arms. This time, we were like -- Ok we have these arms, let's use them.' The band used the same producer, Jason Cupp, and recorded the album at the same studio (Arc Studios in Omaha, Nebraska) as its predecessor -- yet they approached it in a markedly different way. There was a determination to let the songs breathe, to trust in ideas finding their own pace. The final result is a definite, and deliberate, stretching of the band.

As a result, LP3 is less obviously tethered to the band's past than the second album. An immediate contrast between LP3 and its two predecessors is its cover. The two previous albums featured the exterior and interior of a residence in the band's original hometown of Urbana, Illinois (now attracting fans for pilgrimages and photo opportunities), by the photographer Chris Strong. But American Football knew that LP3 was an outside record. Instead of the familiar house, this time the cover photo (again by Strong) features open, rolling fields on Urbana's borders. It is a sign of the album's magnitude in sound, and of the band's boldness in breaking away from home comforts.

American Football also joked that LP3's genre was 'post-house,' because of this very conscious visual break. But, in a strange way, there are links in LP3 with an actual post-house genre: shoegaze. The more exploratory members of the original British shoegaze scene were inspired by the dreamtime and circularity of house music (ambient house in particular), cherishing its sonic possibilities. That spirit drips into LP3, most obviously on 'I Can't Feel You,' a collaboration with Rachel Goswell of Slowdive.

The album also features Hayley Williams from Paramore on the album's catchiest moment, 'Uncomfortably Numb,' and Elizabeth Powell, of the Qu?b?coise act Land Of Talk. Mike wrote lyrics in French especially for her.

LP3 is contemplative, rich, expressive, yet with a queasy undercurrent. It is heavy with expectancy, revealing its ideas slowly, eliciting the hidden stories people carry around with them. 'I feel like my lyric writing has changed a lot over the years,' says Mike. 'The goal is to be conversational, maybe to state something giant and heavy, but in a very plain way. But, definitely in this record, I keep things a little more vague.' As on the first album, the lyrics on LP3 may seem confessional and concentrated, but the more you scrutinize them, the further their meaning slinks away. Or, as Mike tellingly sings on 'I Can't Feel You": I'm fluent in subtlety.

'Somewhere along the way we moved from being a reunion band to just being a band,' says Steve Holmes. American Football is now a bona fide ongoing focus, and they are making some of the best music of their lives. American Football (LP3) stands with two other rare reunion successes -- Slowdive and My Bloody Valentine's mbv -- as a fine example of how a band refinding one another can augment, rather than taint, their legacy.

'I think that there are those albums, or the music that you heard when you were younger, and they imprint on you,' says Nate. 'And no matter where you go, or what you do they're always there.' He is talking of Steve Reich -- an early and ongoing influence on American Football -- but he might as well be reflecting what is said of his own band, and the ardent following they inspire. American Football stands as an enduring symbol of elusive emotional landscapes, where introspection can be as dramatic as confrontation.
All Ages
Tomberlin
On her deeply moving debut album At Weddings, Sarah Beth Tomberlin writes with the clarity and wisdom of an artist well beyond her years. Immeasurable space circulates within the album's ten songs, which set Tomberlin's searching voice against lush backdrops of piano and guitar. Like Julien Baker and Sufjan Stevens, she has a knack for transforming the personal into parable. Like Grouper, she has a feel for the transcendent within the ordinary. Born in Jacksonville, Florida, and now based in Louisville, Kentucky, Tomberlin wrote most of At Weddings while living with her family in southern Illinois during her late teens and early twenties. At 16, she finished her homeschooling curriculum and went to college at a private Christian school she describes, only half-jokingly, as a "cult." By 17, she had dropped out of school, returned home, and begun to face a period of difficult transition in her life. The daughter of a Baptist pastor, Tomberlin found herself questioning not only her faith, but her identity, her purpose, and her place in the world. "I was working, going to school, and experiencing heavy isolation," Tomberlin says of the time when she first began writing the songs on At Weddings. "It felt monotonous, like endless nothingness. It was a means to get through to the next step of life." In songwriting, Tomberlin found relief and lucidity she had trouble articulating otherwise. When she was 19, she wrote "Tornado" on her parents' piano, and began to develop confidence in her music. A year later, she had written enough songs to fill an album. Throughout At Weddings, Tomberlin's lyrics yearn for stability and belonging, a near-universal desire among young people learning to define themselves on their own terms for the first time. "I am a tornado with big green eyes and a heartbeat," she sings on "Tornado," her voice stretching to the top of her range. Rich, idiosyncratic imagery — a fly killed with a self-help book, brown paper bags slashed violently open, clouds that weep over a lost love — sidle up to profound realizations about learning to be alive in this world. "To be a woman is to be in pain," Tomberlin notes on "I'm Not Scared." On "A Video Game," she muses, "I wish I was a hero with something beautiful to say." Tomberlin cites the hymns she grew up singing in church as her greatest musical influence, and while At Weddings in many ways documents the unlearning of her childhood faith, it's easy to hear the reverential quality of sacred music in her songs. "A lot of hymns talk about really crazy stuff — being saved from the depths and the mire, judgment. When you actually realize what you're singing, it becomes really overwhelming," Tomberlin says. "I grew up singing in church. I was still helping to lead worship when I started coming to terms with the realization that I didn't know if I believed. I felt nauseous and shaky reading these words I was singing and feeling their intensity. If I did believe this, how could I sing these words without being scared out of my mind? That's what's influenced how I write."

At Weddings is laden with reverence for music itself, for the power it has to heal others and help people navigate their lives. It is a record about learning to love oneself and others without reservation, from a place of deep sincerity — a lifelong challenge whose tribulations Tomberlin articulates beautifully. "My number one goal with my music is for honesty and transparency that helps other people find ways to exist," she says. With At Weddings, this remarkable young songwriter offers up comfort and wonder in equal measure.